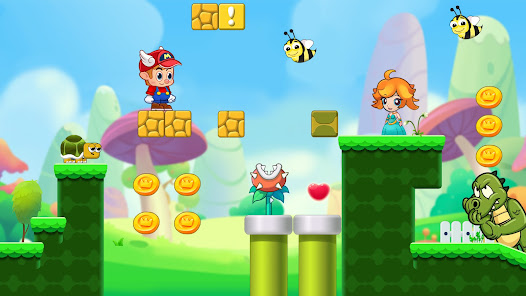 Inspired by the all time classic plumber adventure, Super Manu’s World is a revolutionary jump and run platformer that sprinkled with some spicy flavors.

In Super Manu’s World, our story starts when a sudden tornado raids the happy village where Manu and his beautiful princess lived together. And everyone except Manu was taken by this tornado. It turns out that it was the evil dragon who plotted behind this kidnap. So now the legendary mission falls on the shoulder of our hero Manu, and you must help him save his love and his friends!

HOW TO PLAY
☆ LEFT and RIGHT arrows: run toward respective directions
☆ UP arrow: jump, you can jump higher by pressing longer
☆ FIRE: shoot all kinds of bullets
☆ SKILL: special abilities

Jump right into the game and then the legend begins! The beautiful princess is WAITING FOR YOU!

Let’s conquer the challenges, and have fun with our Free Game! Download Super Manu’s World Now!